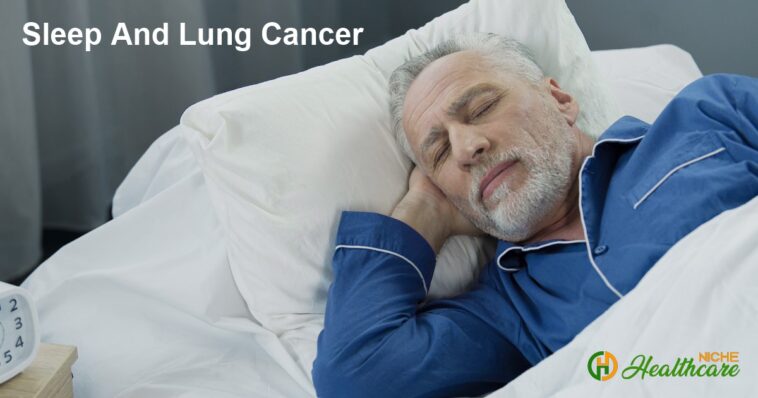 Is there a link between sleep and lung cancer? Our general health and well-being depend on getting a decent night’s sleep. Our ability to think clearly, feel better mentally, and have stronger hearts and immune systems, and a new study suggests that sleep may also help us against lung cancer.

An association between disturbed sleep patterns, which can affect circadian rhythm, and lung cancer was discovered in a study that was just published in the Science Advances journal. The 24-hour internal clock of our bodies, known as the circadian rhythm, controls cycles of alertness and sleepiness and synchronizes them with daytime light and nighttime darkness. Additionally, it offers the steady, restorative sleep we require to maintain our health.

Read More: Do Hair Straighteners Put You At Risk For Uterine Cancer?

According to Dr. Kai Zu, a board-certified oncologist and hematologist associated with a Cancer Center, “epidemiological research suggests disrupted circadian rhythm increases the risk of cancer.” However, this study goes a step further in describing the mechanism by which the disruption of circadian rhythms encourages the growth of cancer.

Based on the findings, when our circadian rhythm is disrupted, it involves a gene called HSF1 that can trigger lung tumors. The study’s scientists used a mouse model divided into two groups. The first group of mice was exposed to a typical light cycle of 12 hours of light and 12 hours of darkness. The second group was exposed to a light cycle similar to what shift workers experienced, where the light hours were moved earlier by eight hours every two or three days. The study found that mice exposed to the irregular, shifting light patterns had an increased tumor burden, which is the amount of tumor tissue carried by the mice, of 68% in their lungs.

Dr. Zu claims that despite the study’s use of mice as opposed to people, it is still a reliable indicator of results in humans. He claims that “animal models are very beneficial in studying human cancers.”

Dr. Zu does point out that there are many different causes of lung cancer and that it is not a single disease. However, these results contribute to our understanding of how circadian rhythm can affect cancer and, possibly, how we can safeguard those who are at risk.

For instance, several studies have found an increased incidence of cancer among shift workers and people with disturbed sleep patterns. While more studies are required, some researchers envision a time in the future when drugs that target HSF1 in those who experience persistent circadian rhythm abnormalities may one day prevent lung cancer. This could benefit the millions of shift workers who are at higher risk, including police officers, firefighters, nurses, doctors, pilots, waiters, food servers, and many other professionals.

Nearly 25% of all cancer-related deaths in the United States are caused by lung cancer, which kills more people than any other cancer type in both men and women. Lung cancer claims more lives each year than colon, breast, and prostate cancers combined.

Smoking continues to be the leading cause of lung cancer, according to Dr. Zu. According to him, “Your risk also increases with both the quantity and frequency of cigarette smoking.” Air pollution and secondhand smoke are two other factors that have been linked to an increased risk of lung cancer in nonsmokers.

The good news is that cutting-edge research, like this study, and medical advancements constantly provide us with new knowledge and improved tools to assist patients with lung cancer.

According to Dr. Zu, lung cancer outcomes have significantly improved over the past ten years. We’ve discovered that methods we may have used in the past are outmoded, and new research is always being developed in the fields of molecular treatment and immunotherapy, leading to more focused, cancer-inhibiting medications for significantly better outcomes.

Unfortunately, early-stage lung cancer often shows no signs or symptoms. Because of this, screening is crucial. Like other malignancies, the best chance of survival is early detection and treatment.

If you smoke, discuss your risk factors with your doctor to determine whether screening is best for you.